He was 38 years old in 1927.He was my grandmother's brother and until I found the passenger list we had no idea what happened to him after about 1911, except that he left England.

If anyone has any clues to his life in Australia, I would greatly appreciate it. I'm sure he continued to be a professional musician. Thanks.

Who were the parents of Edward and Mabel?

She is mentioned as Lucy Dewie in the death notice: 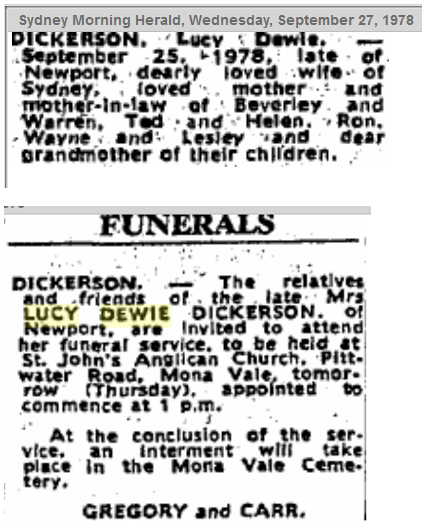 A guess (until we know the names of the parents):

A Mabel Emily Evans dies in 1953 (reg: Manly NSW). She is the daughter of Charles and Lucy Emily

The guess seems to be correct: 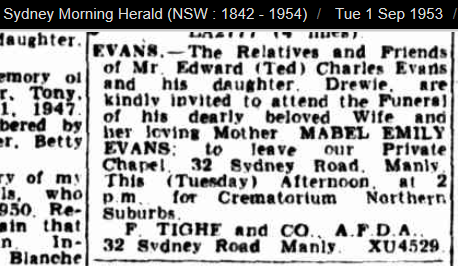 Mabel was my paternal grandmother - married George James Robinson (my grandfather) in 1916.

I have more genealogical information on Edward C's father and mother (including maiden name) as well as the Robinson descendants through Mabel's marriage. I wonder if the Dickerson family would be interested in any of this?.

I would have preferred both of Edwards biological parents as they would be mentioned on his death certificate. A step parent is not very useful!

So I will need to guess again:

An Edward Charles Evans has his death registered in 1967 in St Leonards. His parents are listed as Edward and Sarah Elizabeth.

His birth mother was Sarah Bucknall

Comment by David Robinson on November 11, 2017 at 2:04
Thanks so much, Sylvia.
Is “TROVE” a good place to find notices of the Evans-Dickerson marriage, and birth announcements of her children?